I’ve been trying to actually use my handspun instead of, well, hoarding it in bins.  I tend to treat my handspun as a finished project instead of like yarn to be knit (or crocheted, or woven), and it’s starting to overtake my craft room. 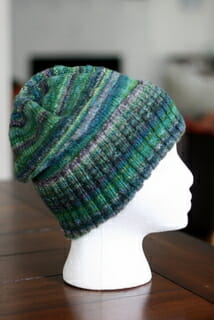 This yarn was one of my very first handspun skeins.  I had some undyed superwash merino roving that I had gotten from a friend, and I tried dyeing it using the instructions I found on the Yarn Harlot’s blog.  I was nervous about the roving floating apart and the colors mixing into a muddle, so I chose these instructions because they involved stuffing the roving into pantyhose in order to keep it from moving around in the pot.  I used squeeze bottles filled with Jacquard dye solution to paint the roving (right through the old pantyhose), wrapped the weird sausages in plastic wrap, then steamed them over boiling water. 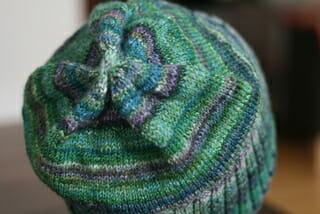 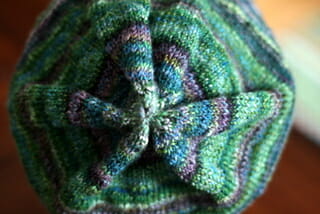 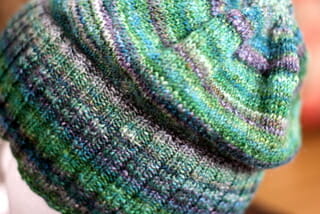 I reduced the slouch factor by about 1″ in the length of the crown, but I completed the decreases at the top of the hat as written in the pattern.  All in all, a great little pattern for using up precious yarn – I’m so excited to be working more with yarn I’ve dyed, spun, and knit myself!

Also, while I was shooting this hat I had a little bit of help from Annie: 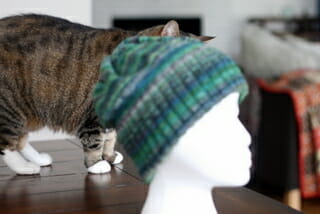 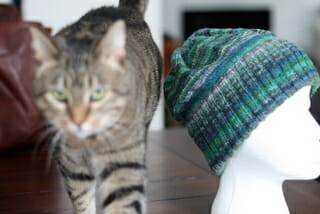 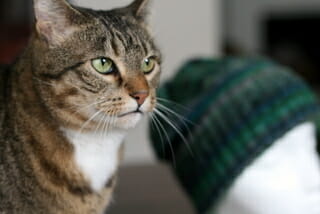