My husband Dan and I bought our first house last year at the end of February, and the upcoming anniversary of our move has prompted a rash of home improvement fixes of the “What do you mean, you never finished the (insert project name here)?” type. 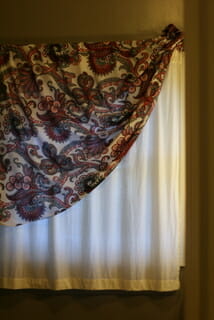 Our bathroom needed major work when we moved in: new flooring, new
shower surround tile, new drywall, new paint, new cupboards.  We’ve been
working on it in fits and starts, but in the last two or three months
we’ve finally gotten to the point where we could start thinking of
comfort or style instead of just function.  I found a cotton voile print that I really liked and put it up over the existing linen curtain as a temporary fix, but ended up liking it so much that I wanted to pull the colors into the rest of the room. 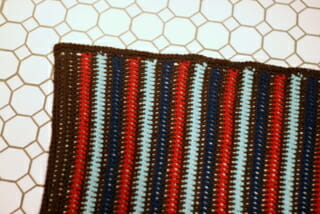 My first bathmat attempt was out of Simply Cotton in about 5 different colors, but when I finished it Dan said “No way, that’s nice enough to be a baby blanket, not a bathmat.”  And then he wrapped himself up in it when I started to argue.

Once he was actually wearing it draped around his shoulders, I couldn’t see it as anything other than a baby blanket, so I went back to the drawing board.  This time, I redid it in fewer colors and stuck to double crochet in order to make it a little sturdier.  I worked a row of single crochet around the edge in order to stabilize it a bit. 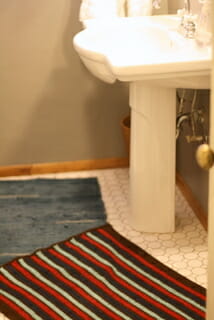 It’s hard to take good pictures of our bathroom since it’s a narrow space, but here’s my finished mat with its bathmat friends.  I still might back the whole thing with some terrycloth and then add something nonslip to the back, but for now it’s a nice pop of color in the mostly white bathroom.  Next step, washcloths made from the leftovers!