Have you seen the five new additions to the Imagination family? I designed the colors so long ago that I almost forgot what they were! It was like I was seeing them new for the first time when I saw they were now available. I am really happy that they are here now because I think they really help round out the entire yarn line. I wanted to create more opportunities for combining Imagination colors, so I created three new tone-on-tone colorways: Ruby Slippers, Arabian Nights, and Enchanted Forest…Ruby Slippers because it felt like there wasn’t enough red represented in the line before, and it could go well with Pirate King, Munchkin, or Gingerbread House…Arabian Nights because I know we have a lot of purple lovers out there (myself included)…Enchanted Forest because, well, I just love dark green, and I wanted a green a bit cooler than Frog Prince.

The two more variegated colorways were chosen purely for the fun of them. Fairy Princess is a nice medium-toned feminine colorway that goes well with any of the other blue/purple/pink colorways, especially Looking Glass. Wild West was inspired by the 20th century romanticized vision of the American West, and I thought it would make a great gender-neutral colorway.

I’ll round out my post with a little eye candy: All the Imagination colors for 2010! 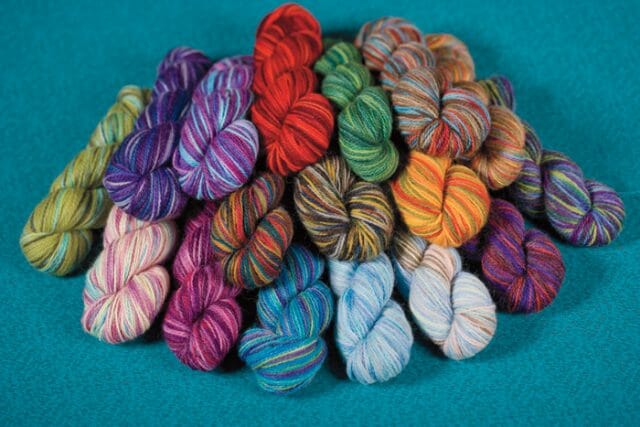 Which colorway is your favorite?