Hubby isn’t the only one with a new sweater, though his modeling is a little better: 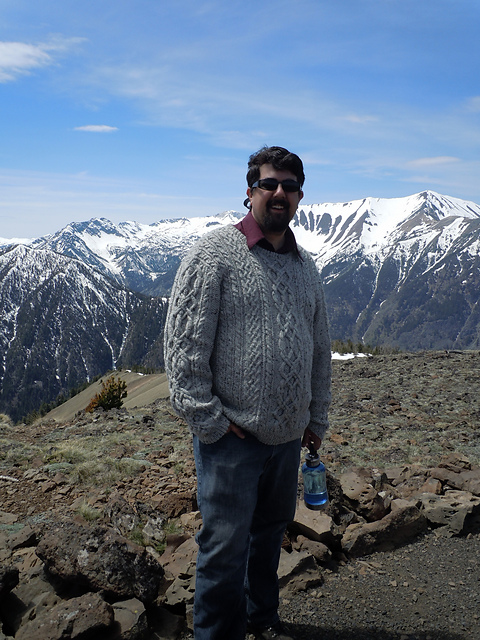 Our house isn’t really lit well enough for portraits, so we went 8300 feet up into the Wallowa mountains to get a shot. The locals were duly impressed, I might add. 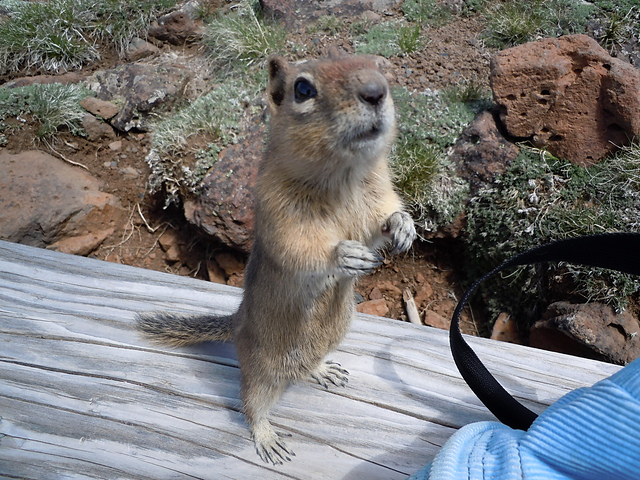 It’s still missing one thing, though. I need to snag it from him long enough to sew in a very appropriate label!

While there, I also finished the little stripy one for myself! 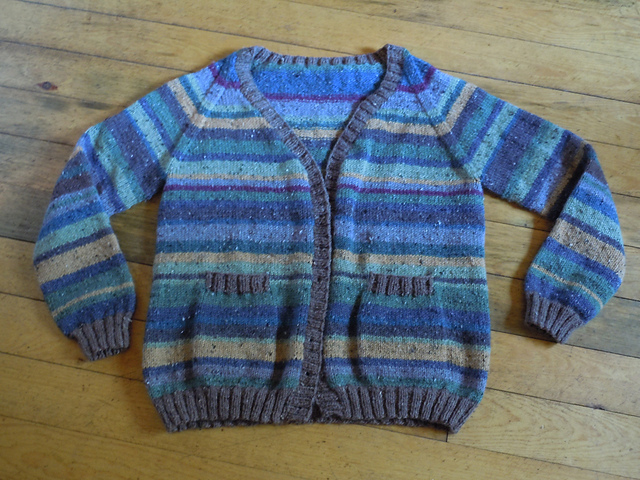 The lighting wasn’t particularly good in the cabin either, but you should get the idea. This used up about 8 balls’ worth of City Tweed DK scraps – some of which were only a few yards long. But, it made a really nice little dent in my scrap stash and I have a new sweater out of the deal. Score! Since this picture was taken it’s been blocked and gotten its buttons, and been worn half a dozen times. I really love the way City Tweed works up; I knit this at a worsted gauge, expecting some drape and a more breathable fabric, and that’s just what I got! Of course, I went to my button stash to choose something, and the only ones I had in the right quantity are cast pewter. Not exactly the best for such a drapey fabric – so I think I’ll have to get some new ones! It’s really nice that we carry so many buttons now, because it’s a lot easier for me to get the quantity I need when I need them (have you ever noticed that the buttons you really really want at the craft store are always almost out of stock? Drives me nuts!). It helps that we have some of each here in the office, too, so I can hold them up to my sweater. That’s definitely an employee benefit!

But, the weather here has quickly flopped into summer, so I think this lovely alpaca number might go into the drawer for a little while. Undeterred by the heat, though, I’ve already started yet another sweater! It’s going to be a little top-down raglan cardigan in Chroma. I’m striping Natural and Smoothie.

I’m still planning on making that tropical sweater in Palette, too – I just couldn’t bring myself to cast on navy blue ribbing just yet! Something about finally seeing the sun again in the Pacific Northwest drew me to the fruity, cheerful colors of Smoothie.

Hopefully I’ll have some time to work on it this weekend, while World-Wide Knit In Public Day (week!) is still going on! Have you had a chance to flaunt your craft in public this week? Got any funny looks or questions from it? Do share!