Hi, I’m Lee, your new digital graphic designer! That means I’m creating the emails you get from us multiple times a week, as well as the graphics on the website, and other assorted stuff. I’m so happy to be here—as a former knitting pattern designer, and a new graphic designer, this job is the perfect overlap of my two biggest fields of interest and experience!

I started knitting around 2002, mostly improvising projects, trying out new stitch patterns and technique tutorials. I didn’t have much interest in following patterns because I wanted to make my own creations… that eventually led to designing and writing my own patterns! My first knitting pattern was published in Knitty in 2007 and I was on a roll from that point on, releasing well over a hundred patterns over the next ten years. Technically, 174 patterns, but a bunch of those were from a big series that used 20 yards or less, so they are like mini-patterns. Anyway, I’ve designed a lot of patterns! This is one that was designed a few years ago in Knit Picks yarns (Wool of the Andes Tweed & Palette): 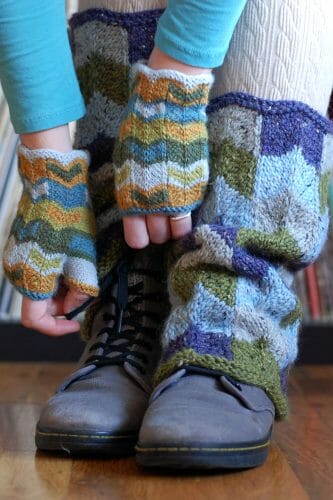 I loved doing that, but around 2015 I realized it wasn’t going to be sustainable anymore as a career, and I’d need to either mainly focus on something adjacent, like teaching, or figure out a new career path. Lots of brainstorming led to getting a not-knitting book published last year, and going back to school to learn graphic design! I’d always loved laying out my knitting patterns, even though I was self-taught; I majored in visual arts the first time around and learned a bit of Photoshop and very basic web design, just enough to be able to do all my graphic design work for my business myself. So I found a great 2-year program to learn graphic design for real, which I started in June 2016, graduated in June of this year, and now here I am at Knit Picks, basically as of October 1st. What a couple of years it’s been! Taking a step back, I was creating my book at the same time I was starting school—it’s a coloring/puzzle book called Color Squared. It’s not directly related to knitting but it’s not exactly UNrelated to knitting. It’s pixel art, color-or-draw by number, that you can fill in tons of different ways, with markers or a pen, or stamps, or I even did one with cross stitch! So that was a fun project that kind of acted like a bridge between my knit design career and my new life as a graphic designer. My self-portrait at the top of this post is in the style of the book (squint when you look at it!). I was still designing knitting patterns a bit while I started school, but the last one I finished was around spring of 2017 so I’m officially done with that (for now? Who knows!). What I’m really excited about now that I’m done with school, and especially being surrounded by yarn here at Knit Picks, is knitting for fun! For myself, for gifts, from other people’s patterns! I’m currently finishing up a Norah Gaughan sweater, I’ve just cast on a Baa-ble Hat by Donna Smith, and I have the yarn ready to make myself a pair of Peace de Resistance Mittens by Bristol Ivy. I’ve also recently gotten into sewing garments, and I’m a yarn spinner too, off and on… I usually go through phases of spinning a bunch of skeins over a couple of months, and then not touching my wheel for a few years! Maybe now that I have a steady job and am not working from home, I’ll feel more inspired to do stuff like spinning at home on the weekends. (Below is a pair of mittens in handspun yarn.) I also like to make recycled yarns (up above is a hat in recycled yarn), and I’ve dabbled in other crafts like embroidery, printmaking (there’s a risograph print I made pictured above), crochet… I’ve always been a crafty gal! I also quite like to write, in case you haven’t noticed, so I may be writing some future Knit Picks blog posts as well. 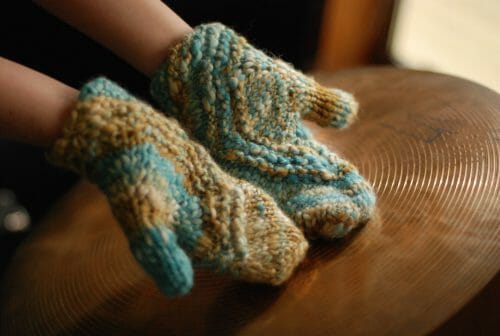 So that’s me, the person behind the emails. It’s nice to meet you!!

(If you want to follow me or check out my patterns and stuff, I’m leethal on ravelry and twitter, leethalknits on instagram, my main website is leemeredith.com and my personal blog is at leethal.net/zine.)