My art yarn came from Milana Hilados
Next Post >

Spindling yarn for my Leftovers Vest
I love my Flower Cowl!
by Kelley on Sep 7, 2010 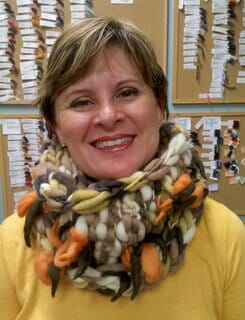 I know it looks bulky but that is only because I was trying to show you as much surface as possible. And, I like pulling it up by my ears. It is warm, cushy, comforting and it knit up so quickly. You also have to imagine it with a winter coat rather than a lightweight summer top.

I did make it a bit more challenging than necessary. The pattern from Milano Hilados suggested using the yarn to stitch the two ends together. But, I chose to start with a Provisional Cast-On so I would be able to weave, or Kitchener Stitch, the ends together. With Size 17, straight needles, it was a very clumsy way to begin. I had to start several times but once I finally got things going, it did only take about an hour to knit. And, I love that there isn’t a visible seam.