I’ve just completed about half a year of knitting for charity, family, and pretty much anyone who isn’t me. When I told my husband that what I really wanted for my birthday this year was to knit something for myself, he emphatically agreed! (and of course added that he wants something too.)

I want a new sweater. Not that I don’t have a bunch already, but there’s just something awesome about new things, you know? I went into my craft room and saw my completely insane stash and immediately drew a blank. With so many choices, what should I knit? So I implore you, dear reader, to help me decide!

So far this year I’ve knit myself a Setesdal-inspired sweater, a
colorwork yoked sweater, a lace panel cardigan, and a stranded pullover
with Turkish-inspired patterning. 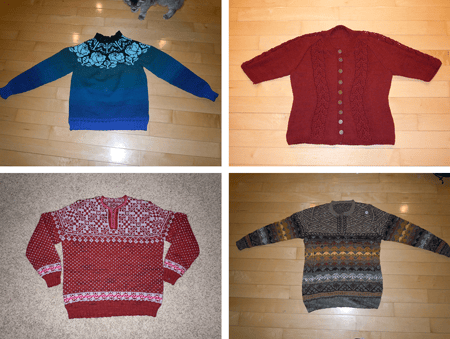 For starters, it’s going to be colorwork. There’s really no way around that for me, since my stash is mostly oddments and solid colors just aren’t my thing. But that’s where all the decision making begins. What type of colorwork? What inspiration? What colors? I’ve got plenty of ideas, but nothing is really standing out. Here are some ideas; there are links to Ravelry to show each style, for reference.

I was first thinking a Fana-inspired pullover would be nice. The stripes on the body are a no-brainer, and I can use multiple colors if I want. Fana sweaters generally have a single band of a simple snowflake or ‘XO’ pattern across the top- easy to memorize and work on the go. Less involved than a Setesdal sweater, and uses more of the contrast color.

Faroe sweaters are only slightly more involved, Usually consisting of no more than three colors, the body patterning is the same throughout and often in check or ‘wheel’ type patterns. Again, very easy to memorize and work on the go, but not as fast to work as the striped Fana. They look great as raglans, which is nice because there’s no seaming!

And then, of course, there’s Fair Isle. Everyone around here knows how I feel about Fair Isle – it’s my favorite thing to design. But it really is a lot of work! I think if I go the Fair Isle route, it’ll be in worsted weight. I have tons of Wool of the Andes oddments – just right for stranded knitting.

But naturally, that’s not all. I have some lovely, locally produced lopi-style yarn – just right for an Icelandic yoked sweater. In fact, I might even have enough to make it a hooded sweatshirt. That might be neat.

As for colors – I love color, and I have pretty much all of them. What’s really funny is that the few almost-sweater-quantities I have are not only purple, but the exact same shade of purple. I could make at least four sweaters in that shade of purple – but I’ve already made three in that same shade. So, I’m thinking purple might not be the way to go, but with so much of it, it’s nigh unavoidable. (funny to note, I also spent three months last year only making purple socks – you guessed it, in the same color! Purple is not even my favorite color!)

So, what do you think? Got any suggestions? I’m just itching to cast on!