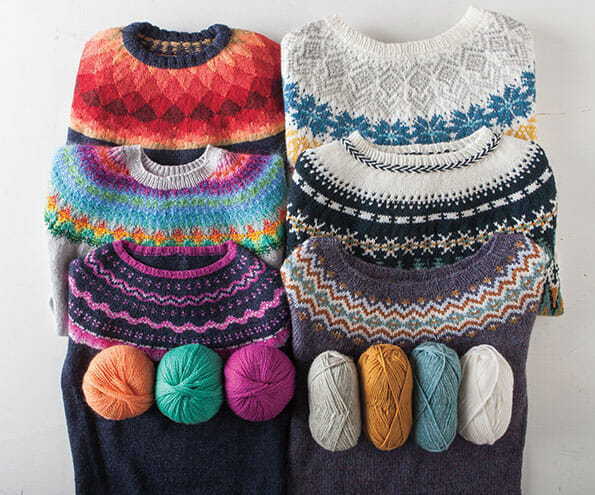 Encircled started with one word: YOKES. It may or may not have been excitedly half-shouted out to a meeting full of easily startled people. We were already excited about the possibilities, the response from our designers was wonderful, and we’re thrilled to finally be able to offer every one of these magical designs.

Colorwork can be a a sticking point for a lot of knitters. Like knitting in the round, it’s one of those skills that seems like a huge hurdle when you start, but after a certain point you won’t know how you lived without it. Even if you’re just getting started with colorwork, several of the patterns in Encircled are still quite accessible, and a great way to practice your stranding. You can work your way from novice to master in just one collection. 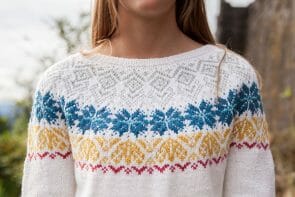 To start with, we have two very different sweaters that both are top down construction with solid backgrounds and motifs made with one color at a time. There are only ever two colors used per row, and you’re also not changing frequently between colors from row to row, so they are perfect for really focusing on perfecting your tension and getting those floats just right. We all know that good knitting is about 90% muscle memory, so practice really does make perfect.

With these beautiful designs, you won’t be wasting your time either, whether you’re more of a traditionalist looking for the classic motifs of On the Fair Side or a modernist more partial to simpler abstracts, like the circles in the Bubbles Pullover. The minimal color changes and clean motifs also make these perfect for color customization. Choose just your favorite blues or greens for a trendy, gradient-style On the Fair Side, or pick a red, yellow, green, blue, and purple for a whole rainbow of Bubbles. 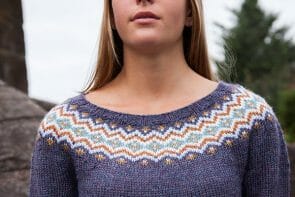 The next level of yoke greatness still features only classic Fair Isle two-color rows, but you’d be surprised at the intricate diversity you can achieve with only two colors at a time. The motifs in these patterns are much more intricate than the previous two, but the only difference is in how frequently the color changes come.

As before, the two Encircled patterns that perfectly show off the possibilities at this level of complexity are a classic-style design in the Spanra Pullover and the more spare and contemporary stylings of the Lewisburg Pullover. These patterns have you changing colors basically every row, so you’ll have to do a lot more yarn ball juggling from row to row. Colors often skip rows, resuming the row after, making it easier to leave the color attached and carry it over the skipped row. Both patterns also have spot colors, where you might use a color for only one row, creating more ends to manage. But ultimately, stitch-by-stitch, the mechanics are still the same two-color rows from the simpler designs, just with more color management. 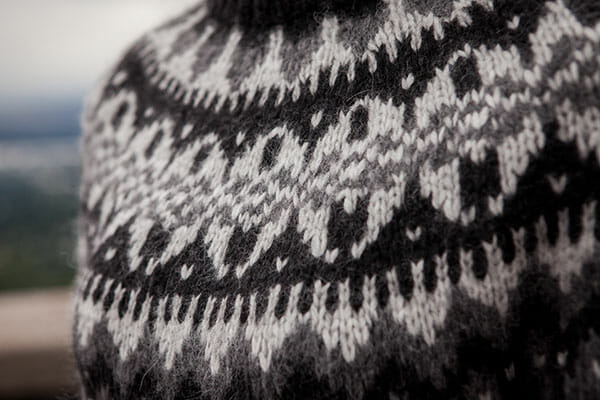 Finally, we have the most elaborate designs, which in stranded colorwork generally means three-color rows. To be honest, the Eldfell Pullover only technically falls into this category, as the motif only has a single row that uses all three colors. Because of that, it’s a perfect opportunity to ease into using more than two colors, with a three-color row at the hem and cuffs in addition to the yoke. You’ll be amazed at how quickly the bulky weight Wonderfluff knits up, and you kind of haven’t lived until you’ve tried on a sweater in what might be the softest, lightest, most delightful yarn ever. The arrival of Wonderfluff samples inevitably results in literal chortling. 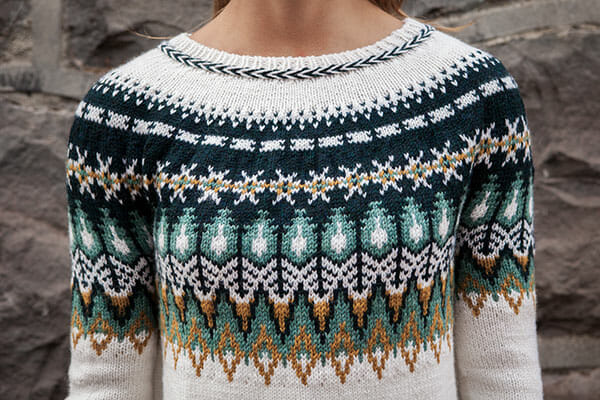 The Bistort is probably my personal favorite in the collection, but that might be based entirely on my obsession with Latvian braids. It’s an exotic technique with an unmistakable look, and it’s actually not all that hard to do. It basically involves purling with the yarn in front, changing between colors each stitch so that they twist together. It feels odd at first, as it goes against a lot of basic knitting motions, but it’s rather easy to pick up. This sweater also has a number of rows with multiple colors, including one row with 4 colors worked simultaneously. Most of those rows are grouped together towards the beginning of the yoke, and easily half of the yoke is actually simple two-color knitting. And the result is pretty fabulous. 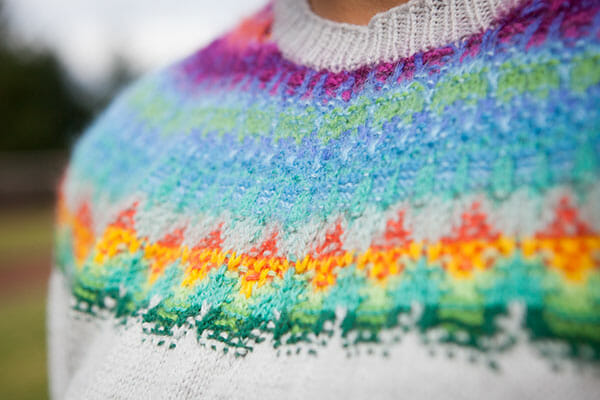 At the height of Encircled fabulousness is the Tuva Pullover. 15 colors, regular three-color rows, multiple yarns, knit/purl texturing. It’s the most complicated of the patterns in the collection, and it’s pretty amazing in person. I guarantee that you will not be able to walk around in this sweater without receiving an almost-constant flurry of compliments. 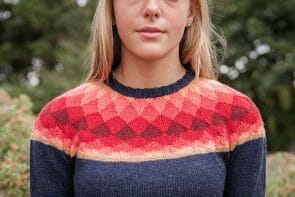 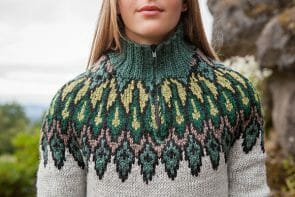 It’d be hard to make an entire collection of stranded colorwork without including one of the most nerve-wracking knitting techniques: the steek. I’m sure I’ve had nightmares (knitmares?) involving scissors and some of my favorite knits. Recently one of the knitters in the office worked their first steek. . .and it was actually pretty uneventful. With the proper preparation, it’s really not that big of a deal, and it’s a powerful tool for doing colorwork.

Two of the sweaters in Encircled use a steek, and both of them are pretty wonderful designs. The Phased Yoke is an awesome modern design made with only two-color rows, fitting it nicely into the second level of yokes, making it a pretty simple knit other than the steek. And the Baldrun even uses the steek to create a cozy zip-up front; add that on to warm and hearty Wool of the Andes Superwash Bulky and you get the most cold-weather friendly sweater in the collection. With a smattering of three-color rows, it fits comfortably between the Eldfell and Bistort sweaters in difficulty. Both patterns include thorough written instructions for the steeks, and you can always refer to our handy video tutorial.