Awesome Color Depth Through Overdying!
A Fanciful Unicorn Friend for Big Imaginations
by Knit Picks Staff on May 18, 2010

When Kerin and I were faced with the challenge of designing fun, playful kits for a kid-and cotton-themed catalogue, we decided to imagine ourselves as kids again and figure out what kinds of things we would have wanted knit for us. It wasn’t much of a challenge, really. Sweaters??? Bo-ring! Scarves? Suh-NORE!!! The kids in us wanted something that would be really, truly FUN to play with, especially in the warming days of springtime. 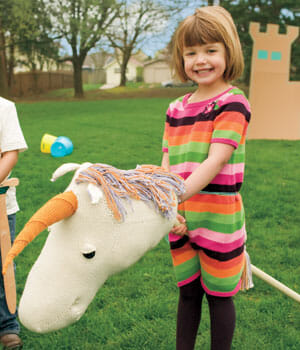 As a child, I never liked to play that I was riding a hobby horse, rather, I liked to pretend that I WAS the horse. I might have been a little weird, but if there are other kids out there like me, then they will surely appreciate that the unicorn kit comes with instructions for a tail they can wear around their waists, to better pretend to be a unicorn with! 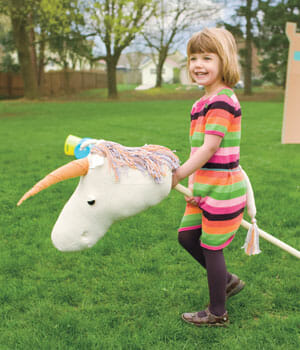 The Unicorn is worked out of Simply Cotton Worsted, a soft, machine washable, affordable yarn, and then machine washed and dried on high heat to pre-shrink the fabric before stuffing it. The Unicorn in the above photos was knit by one of our amazing and hilarious test knitters, Susan (aka NoKnitSherlock), and she and I had a lot of laughs over the gruesomeness of the disembodied horse head that would somehow become a loveable child’s plaything. She even made me a card around it: 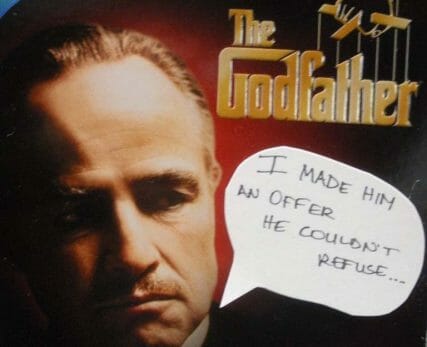 Those of you who are familiar with the Godfather, or this episode of The Simpsons… 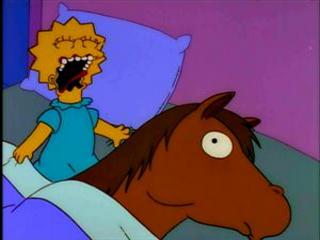 …can probably guess why we found that so funny 🙂

I know I would have loved a toy like this as a kid…I mean, I love it as an adult! I spent at least a week hugging the sample at my desk when we got it back. (I did some work that week too–my boss reads this blog!) I’m sure it will make a greaat gift that a child will get many years of joy out of. Happy Knitting!