Yum, my yarn smells like cherries.
Awesome Color Depth Through Overdying!
by Knit Picks Staff on May 19, 2010

So many people around the office have jumped into dyeing this month as members of our Dye-Along, which makes me so glad! Dyeing is one of the most relaxing, creative, and fun hobbies I have, and I love that we’re all sharing the cool tricks and ideas we’re discovering. Knit Picks offers a variety of natural-colored yarn bases that are perfect for dyeing; the creamy colored wool takes all kinds of dyes wonderfully and gives you, the dyer, amazing control over the range and depth of colors in your finished yarn.

I love dyeing natural colored yarns, too. But sometimes, I just have to shake things up. 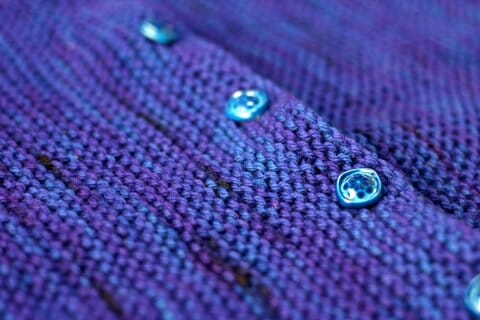 This is my latest finished sweater project. It started out as 500 grams of royal blue 4-ply worsted wool that I bought at a mill end sale, and it looked like this: 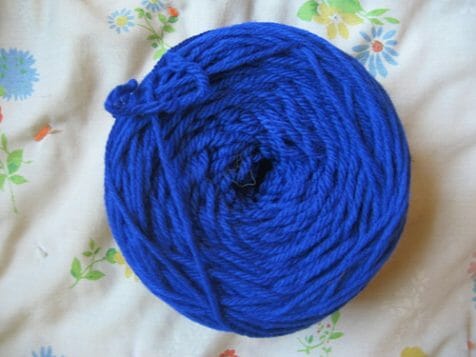 I was initially attracted to this yarn because I love deep, saturated colors. I saw it paired with a light grey or beige in a vaguely nautically striped garment. But as the months (ok, ok, years) passed, I fell out of love with it, and lost my inspiration. Typically, this is a circumstance in which I would de-stash, or sell the yarn off to a knitter who was excited to work with it, but I had just caught the dyeing bug, and I wondered if maybe I couldn’t transform it into something I loved again.

I wound all the yarn into a long hank and tied it in several places with figure-8 ties to keep it from getting tangled. I filled up my giant dyepot (actually an ancient enamel stockpot from the goodwill!) with water and one single jar of WIlton’s icing dye in Violet.

I dissolved the dye and added only a small bit of vingar, because I wanted the dye to take up slowly. The more vinegar you add, the faster the dye will strike (generally–there are some exceptions but that is for another post!) and since I wanted a somewhat even amount of variation in my yarn, I added the vinegar later, to set the dye once it had been pretty evenly absorbed.

I ended up with about 1100 yards of semisolid, deep purply-blue wool, enough for a whole sweater! And that’s exactly what I did with it! 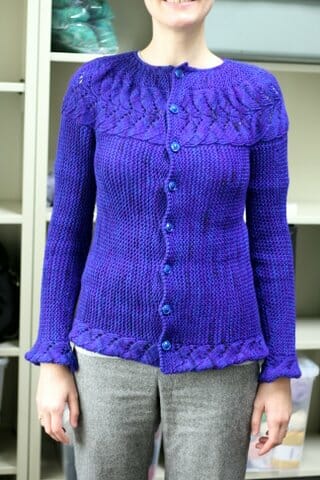 I used Ysolda Teague’s Vine Yoke pattern, with some modifications to make wrist-length sleeves and to fit the body to my long torso. The pattern runs a bit large so I knit a size smaller than I usually wear and was glad I did. And finally, this piece is knit sideways, and was the first sideways sweater I’ve ever knitted. There are many points in the pattern where stitches are placed on a holder to be worked later, many provisional cast ons, and grafting. I would never have gotten through all of it without Options needles–I used the cables with endcaps as stitch holders, so I could add on a needle tip when I was ready to work them again, and I used a cable as the waste yarn in my provisional cast on (Iike the “open” cast on, which is the first one described in the article), so when it was time to work those stitches, I already had them arranged on a cable.

And of course, I loved every minute of working with this beautiful yarn! Ultimately, I could prbably have acheived a color like this by dyeing a bare yarn, but it would have taken a lot more time and attention on my part. I recently dyed up another sweater’s worth of yarn (which I’ll be sharing with you soon!) and believe me, it was a looong process before I got something I was happy with. Overdyeing turned out to be a really fast and easy way to get a color I was thrilled with! If you want to try it yourself, I suggest using a dye that is in a color family close to that of your base yarn, so you won’t have extremely jarring effect, just a subtle variation. I think that blue dye over a green yarn would be lovely, or red dye over and orange, or purple over a red, etc.

And..a couple more gratuitous sweater shots becuase I am just so in love with it!! And let’s all give Alison a special thanks, she took these gorgeous pictures. 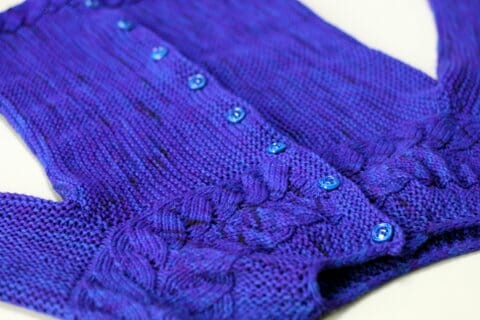 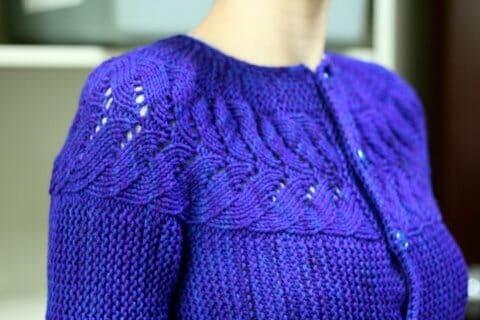