I have a lot on my plate craft-wise right now– or should I say, a lot on my needles and hooks? In addition to my regular job of designing patterns, I have sweaters on the needles, a new sweater class to teach here on the blog, I’ve learned to double crochet, and finished a few squares for my project (which I’ll be sharing next week!), and I’ve dyed about 900g of yarn in the last month! Whew! And with all this fun stuff going on, it can be pretty hard to remember the dozen unfinished projects I have laying around my house! So last weekend, I picked up one of my oldest and most adorable UFO’s and finally finished her up: 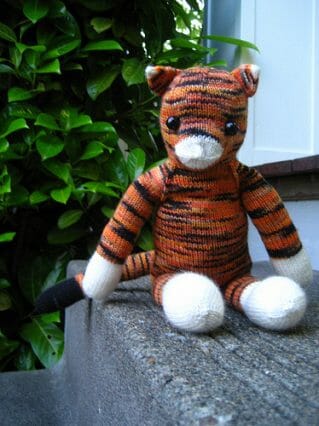 This is my interpretation of our Mr. Foster Pattern, but TIGERIZED!!! I used our Stroll Handpainted yarn (in Tiger, naturally!) for the body, and Bare Fingering merino/nylon for the paws, and Stroll in Black for the tip of the tail. I followed the Mr. Foster pattern loosely–the stitch counts are mostly the same but I shortened the torso, made the feet more bulbous, and use increases and descreases along the lower front of the body to make the toy look a little fatter. For the head, I also shortened the lenth and worked a round toe instead of a wedge one, and I made the snout like a little afterthought heel instead of with short rows! 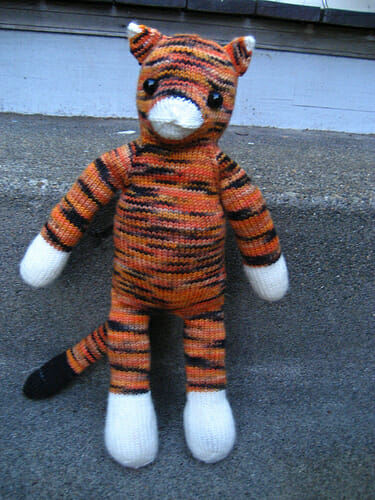 I worked the ears in the round, and made them pointed instead of round like Mr. F’s, and sewed them to the top of the head instead of the sides because it seemed like that was where they should go. I’m not sure I’ve ever seen a tiger in real life, but this isn’t a terribly realistic tiger so I feel like it looks ok :). Some creative improvisation when weaving in the ends let me sculpt the snout to the way I like, and now all she needs is a little embroidered nose to be all complete! I’m really happy with the way she turned out. I wanted to give her away as a present but now that she’s done, this strange urge has come over me to knit her teeny clothes and play with her myself!

Not now though–I still have too many projects to finish!