Well, i really couldn’t wait for silly hubbster to make up his mind about the trout yarn. So I got him some Hawaiian shirts on sale and cast on something for myself! So there!

I was thinking socks at first, but with summer on its way I wanted something I could get a little more use out of. Since summer clothes are generally pretty light, but the AC in this building is, well, temperamental, I decided I’d make a shrug instead! 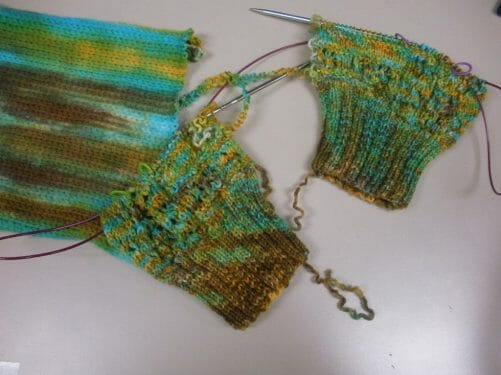 I’ll be working this from the end of the sleeves inward, making two mirrored pieces that are connected down the back. If there’s enough yarn, I’ll do a border – if not, I’ll dye some scrap Bare Stroll that I have in a coordinating shade and use that. The fact that there are 462 yards of Stroll in the Sock Blank is pretty awesome for socks, not so much for garments. I decided lace would be the way to go to make the best of it. 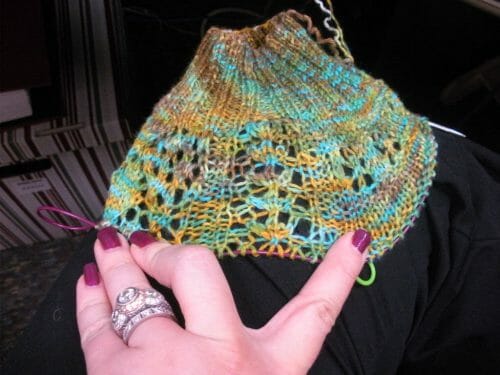 Ordinarily I wouldn’t recommend lace with such a wildly variegated yarn. But, in this case, it’s less for looks and more to make the best of what yarn I have! The stitch definition probably won’t be very obvious in the final product, but I’m OK with that. But just keep that in mind if you’re planning something similar – if you want to see the lace pattern, go for a more solid colored yarn.

I chose a few stitch patterns from the Barbara Walker treasuries, modified them to my liking (because I can’t leave well enough alone, you know) and charted them. I’ve only gotten past the first chart repeat so far. There will only be about two or three repeats on the sleeves, as this is a short-sleeved shrug. So, really, with the ribbing, I’m already halfway done the sleeves. Woohoo! One good thing about the blanks is that you have a built-in progress meter. A blank is about 33.5″ long. I’ve used 8 inches of my blank so far. That’s almost a quarter of it! So, I know that before I get to the one-third mark, I’d better start in on the body. 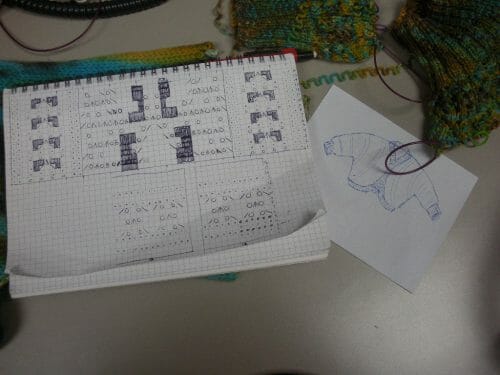 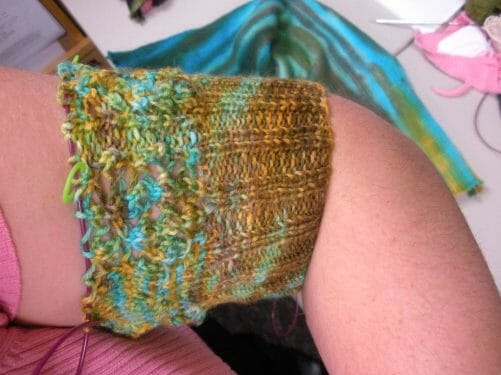 The only weird thing about knitting from the sock blanks is the kinkiness. This isn’t my first time knitting from one; the first time I did knit socks. The kinks in the yarn were much more pronounced because of the small stitches in the socks, but they washed out. I’m not seeing nearly as much of it here because I’m using size 5 needles. In this case, it’s separating the two strands as I work around the sleeves that is proving difficult. I know that before each two-round set (I’m working in magic loop), I should go ahead and separate the strands. But in my excitement to see the next round, I don’t, and it gets all wadded up on itself. So, let that be a warning to you. Yarn management is key! You can also pre-wind each strand into separate balls of yarn if you want. That will also give you the ability to start knitting from the other end of the blank (the end that doesn’t unravel) if you want to.

Hopefully this will be a pretty fast knit. I actually have to pay attention to it because of the pattern and shaping, and my attention span is pretty limited. Hopefully I can bust this out before I head out to the desert in a few weeks, because I have only enough attention for stockinette in that heat! 🙂