Angela and I went to the TNNA winter show in Long Beach, CA last week.  It was a little different for us than other shows we’ve attended – this time, instead of just walking the floor as a retailer, we were exhibiting as wholesalers!  We’ve just started selling our needles to local yarn stores, and it’s possible that they’re already at a shop near you.  Alisha made this initial list of LYSs that carry Knit Picks needles, and we’re adding new stores faster than we can update the list! 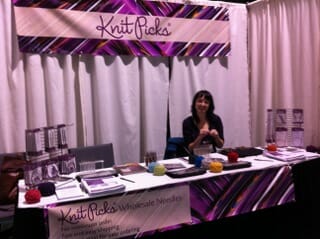 Here’s our fancy booth – we had out all three types of needles along
with some yarn so that knitters could try them out.  One nice part of working the show is that we both got to knit for hours and hours!  I finished a couple pairs of mittens, and Angela finished a couple of gift projects too. 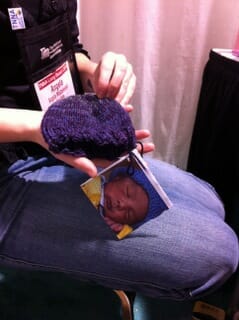 Here’s a photo of the baby hat Angela knit for charity.  It was originally a sock, but the cuff was a little too wide.  Rather than rip it out completely, Angela just repurposed it into a wee cap and added it to the box of charity hats at TNNA.  Here’s to keeping tiny heads warm!