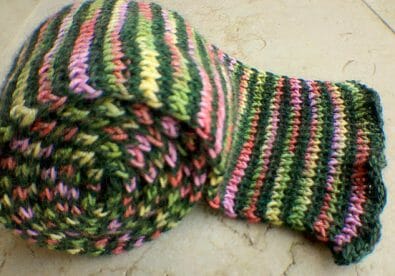 I knit the first scarf using the basic concept of Jared Flood’s Noro Stripe scarf. I used Palette and a colored yarn I picked up at Sock Summit. My plan was to use the finished scarf as a swatch gauge of sorts. I had no idea how long to make a scarf so I kept knitting until I felt it was long enough and I had used up about half of my Forest Heather Palette.

I have never had a lot of luck with scarves knit lengthwise. They end up being insanely long! I was also not sure how long the scarf would be when I reached the halfway point of my Palette. Once I finished the first scarf, I counted up the rows and used that number as my cast-on number to use the same stitch pattern to knit the long way. Yes, I know that knit stitches are taller than they are wide but I just wanted to be sure that the finished scarf wasn’t miles long. I think the difference in the scarves will keep the girls from having any issues. I could knit scarves in completely different colors but I don’t have anything else in “girly” colors. 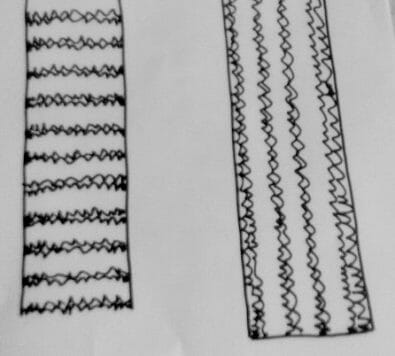 My calculations had me casting on 551 stitches. I pulled out a long strand of Palette to work a long-tail cast-on. I was a bit short so I settled for 515 stitches. I like not having to turn my work so often – lots and lots of K1,P1. I should be finished in the next couple of days.