I make no secret of the fact that I love baseball – from April to October, my brain is filled with practically nothing else.  While I’ve always liked baseball growing up, it wasn’t until the last couple of years that I became completely obsessed with the sport (living in Boston when the Red Sox won the World Series in 2007 will do that).  And since I now live here in the Pacific Northwest, I’ve become a big Seattle Mariners fan as well – I’ve gone to several games at Safeco Field, and I watch as many televised games as I can during the season.  But one surprising thing I’ve never done is go to a Stitch N’ Pitch.  Well this year I changed that!

This year’s Mariners Stitch N’ Pitch was less than a week after our beloved #51 Ichiro ran off to join the New York Yankees.  But all us M’s fans were determine to cheer on our team in their game against the Kansas City Royals.

Arriving at Safeco, all the crafters were greeted by The Mitt with a special addition to it: World Vision covered the iconic sculpture with donated knitted & crocheted squares – and afterwards, all the squares will be reassembled into baby blankets for babies in need.  It looked really neat and what a fun idea. I only just managed to get this shot without anyone in front of it – it was a great place for a photo op, that’s for sure!

After getting my usual ballpark snack of a bag of kettle & caramel corn mix and collecting my special Stitch N’ Pitch bag, I went up to my seating area and found that there were tons of yarn & fiber sellers there!

There were so many yarn shops & local dyers representing!  I actually wasn’t expecting so many booths, but it was certainly fun looking at all the pretty yarns. I did manage to contain myself & didn’t purchase anything – though I really wanted to, there were some beautiful indie dyers there.

I settled in my seat & found that IDP designer Melinda VerMeer was just down the row from me!  It was fantastic to see her again, and she was wearing her lovely Ms shirt.

In fact, I had brought along my version (in Swish Worsted) of her Mariners Ball Park Cap that I had recently completed – though it was too warm to wear it at this game. I just stuck with my regular baseball cap to keep the sun out of my eyes. 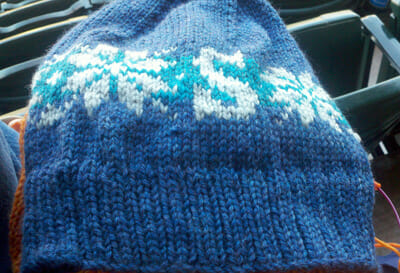 Underneath was my knitting project for the game – my Hitchhiker Scarf (which I finished!).

I sat next to some very nice ladies from the Portland area (we had all purchased our tickets at our local yarn store Happy Knits), which was great since I was on my own.  I had a fun time meeting everyone and chatting about baseball and our current knitting projects.

The game started and from our seats we had a great view of the field. 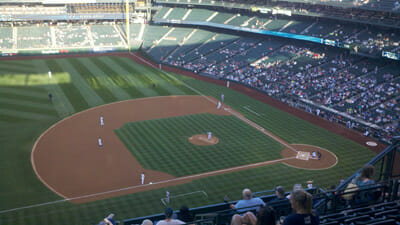 The weather was perfect – a beautiful & cool Seattle night – just what you want for a baseball game.

The game was a lot of fun, even without our former star player – the guys played a great game (especially one of my favorite players, catcher Miguel Olivo) and I nearly lost my voice cheering them on! Plus, it was great seeing so many people knitting or crocheting around me.

Oh and the best part of the night? 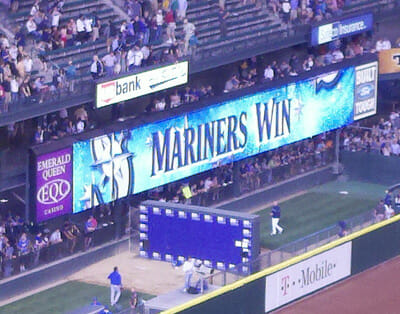 I can’t wait until next year!  I’m going to convince some of my coworkers to join me, even if they aren’t big baseball fans. I think my photos of the yarn booths is swaying them.

Have you gone to any Stitch N’ Pitches in your area? Tell me about them in the comments!