Food-Colored Sock Blank!
On sleeve cap height and changing your mind too often
by Knit Picks Staff on May 7, 2010

Well, I’ve made a little progress on my hubby’s sweater. Not nearly enough, though! I spent all my knitting time this week charting out the shaping and design of the top, and almost none of it knitting. So it’s not as far as I’d like it to be! 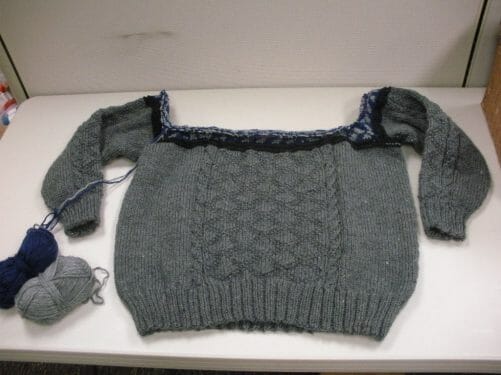 My intention was for this sweater to have low sleeve caps and set-in sleeves. This would increase the sleeves’ angle relative to the body and give more range of motion – pretty important when fishing! But then I decided because the top would be stranded that I would knit in the sleeves. Well, low caps and knit-in sleeves aren’t really a good match, unless the sleeve is deep relative to the armscye. In this case, it’s not. So, I’m going to change it up again, and cast on steeks between the front and back of the sweater, put the sleeves on holders and knit them and sew the rest of the caps in later. This will be some funny looking construction! But, in the end, it’s unlikely that it’ll be really all that obvious. At least that’s my hope.

Considering that this is also superwash yarn, and it’s bulky, I’m going to hand sew the steeks with a thin, feltable yarn like Palette. That way, the stitches will felt to themselves when I wash it.

Well.. one weekend left. I doubt I’ll have a chance to work on it tonight, since hubby is home. I think he’s getting suspicious that I’m up to something, because I’ve been ducking into my craft room an awful lot more than usual. So tomorrow is just about it! Yikes….