For experienced knitters, we get so used to knitting terms that we don’t even think about them anymore, but for the beginner it can seem bewildering. A little understanding can go a long way, and I’ve always found a singular pleasure in “useless” knowledge, so let’s explore a little about yarn weights. 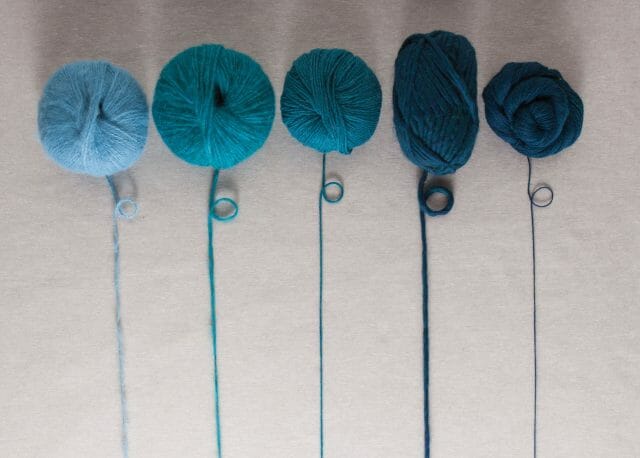 Seems fairly self-explanatory, the Old French word that “lace” derives from refers to a net, string, cord, or snare; it comes ultimately from the same Latin word that gives us “lasso”. Anyone that has accidentally entangled themselves in a large, lace shawl can see where this connection comes from!

Also has an interesting history, as it does not come from the English word “finger”. It is actually a corruption of the Old French fin grain, which literally translate as “fine grained”. So more a direct description of its weight, rather than having anything to do with what you do with your fingers!

A semi-descriptive term without a clear origin. The word ’sport’ is not meant in the athletic sense, but is thought to come from sportswear, which this lighter weight yarn is often used for. Sorry, no juicy trivia here.

Perhaps the dishiest term on this list, with some dispute as to its origin and meaning. The most widely agreed-upon story has to do with the way yarn used to be made and categorized, particularly in the UK. It used to be that yarn was mostly spun out to a uniform thickness, and these were then plied together to form yarn. The weight mostly used for knitting was a 2-ply and so was commonly referred to as “knitting weight”. Yarn could be made with more plies, but generally if you wanted something thicker, it was simpler to use multiple strands of your standard yarn, so if you wanted something twice as thick, you used 2 strands of “knitting weight”, or “double knitting weight”. Or DK weight.

Another less common explanation comes from post-WWII rationing. The idea is that instead of using the resources to spin both Sport and Worsted weight yarns, to conserve materials a single yarn was made to fit between those categories, allowing for adjustments in needle size to obtain the finer or coarser gauge. So it could be said to “double” for both Sport and Worsted weights.

This is not to be confused with the “double knitting” technique!

Another false cognate, having nothing to do with “worst”, rather it comes from the village of Worstead in England. A center of the fiber industry as far back as the 12th century, it was known for its fine spinning.

To confuse the issue, “worsted” has long referred to any yarn spun from fibers combed parallel. When fibers are not combed this way, spinning produces a less uniform, looser, loftier yarn, referred to as “woolen”. These days, most yarns are “worsted” in this sense, so this distinction became less useful. At some point, “worsted” came to more generally refer to the common middle weight yarn category.

All are terms of more recent invention and explicitly descriptive. They mean basically what they say.

For a more technical exploration of yarn weights, read our tutorial.