Beginning to Knit - My Crafting Journey
Introducing Knits for Everybody. . .Two!
by Daniel K. on Aug 7, 2017

If you’re an advanced knitter, those 65 thousand results can be just as frustrating if you have a very particular idea of what you’re looking for, but don’t want to go through the math of writing your own pattern. The KFE patterns easily act as templates, with all the fiddly bits worked out for you, so you can experiment with the fun parts. 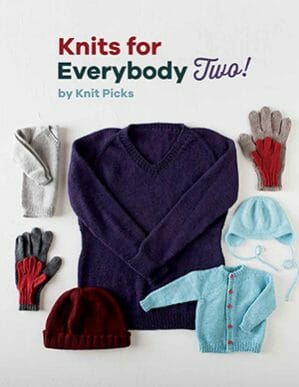 With Knits for Everybody Too, we’ve revisited the original concept to expand the selection. Whether the patterns were chosen to fill out basics not offered in the first book, like the Cardigan and Gloves, or to give useful variations on those other patterns, like the V-Neck Sweater and Top-Down Hat, we are pleased to offer everything in this useful, new book.

If you read the blog regularly, you might remember that one of my crafting resolutions for the New Year was to actually finish my first sweater, which I started last year (with the yarn I had bought specifically for it more than a year before. . .). Part of the reason it took me so long was the pattern I chose. Bottom up, cable repeats, saddle shoulder, shawl collar. It’s finished, it’s gorgeous, but I can’t really recommend it for a first sweater. 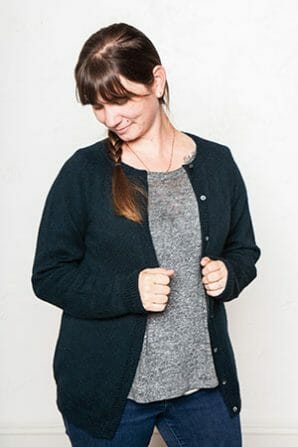 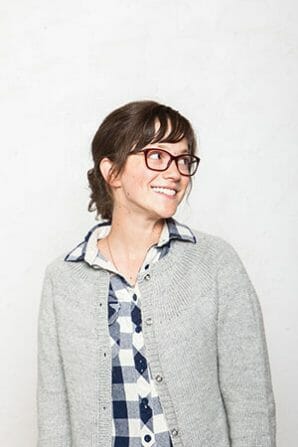 Enter the KFE2 Cardigan. I’m actually making this pattern right now, and I most definitely can recommend it for a first sweater. It’s so easy. The classic circular yoked design means your shoulder shaping comes from just three short rows at the back and three rounds of increases. If you can do Wrap and Turns and Make One increases, you can make this sweater.

Full disclosure, I’m using German Short Rows and a knit below increase, because I hate Wrap and Turns and I prefer the look of the knit below. But that’s also the beauty of this pattern, it’s so simple that it begs for customization. I’m doing some minimalist contrast that I’m really excited about (partly because I’m using our new Hawthorne Tonal, Klamath Falls for the main color and Astoria for contrast, and I literally cannot overemphasize how gorgeous it is). And I’m planning a modification to the collar to give it a less feminine silhouette.

If you’re a newbie that loves cardigans (high five) or a veteran looking for a blank canvas to work out some ideas, this pattern will serve you both ways.

My second project ever was a pair of gloves. To set the scene, this was almost 2 decades ago. No Ravelry, no Etsy, no internet shopping. My first project was a hat, and I used the pattern from the back of the yarn ball label. Truly, it was a dark time. But I decided I wanted gloves, so I figured it out for myself. You’re better off if you cannot imagine how frustrating that was. One of the most satisfying moments of my life was putting that first glove on and somehow miraculously having it fit. On the whole, it was not an experience I recommend, and I wish I could go back to my teenage self and give him this book (and a haircut). 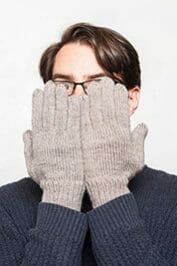 In keeping with the Knits for Everybody theme, we didn’t hire professional models for this book, instead asking some of our staff. That’s me wearing those gloves, so I can tell you that these are some of the most comfortable things I’ve had on my hands. The pattern is simple and to the point, ripe for imagination. I know I have some Felici that I’ve been wondering what to do with.

Raise your hands if you’ve ever made a hat that didn’t fit? No? Am I the only one? I think the third hat I ever made actually fit. More or less. And I cannot tell you how many hats I’ve half finished and ripped out because of sizing issues. 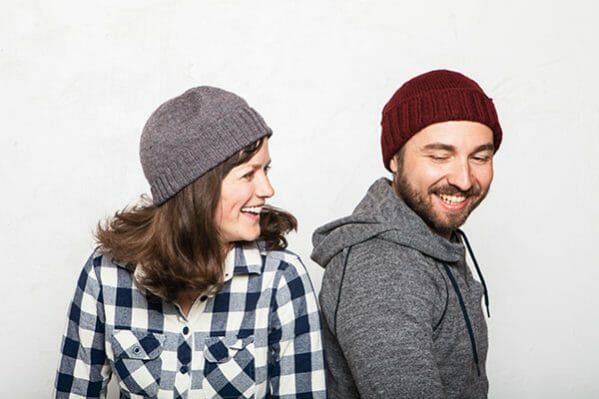 If you can relate at all, this pattern is your salvation. We figured, you can have a top down sweater, why not a top down hat? You don’t have to get three or four inches in to try it on, only to realize it’s too big/small. Just plop it on your head every so often while starting from the crown. Even if you do realize you’ve gone too far, you can rip back only as far as you need, instead of starting all over again with a different stitch count.

Also, though I think I’m contractually obligated to advocate for swatching, I’ll just say that it would be a lot easier to get away without a swatch with this pattern.

A friend of mine hates crew necks. She will literally cut the collars off of t-shirts so she doesn’t feel like she’s being half-choked all the time (her words). Personally, I like crew necks, but Knits for Everybody is about, well, everybody, and we wanted sweater options for anyone, no matter their tastes. All of you V-neck lovers that spoke up after the last collection, we heard you. 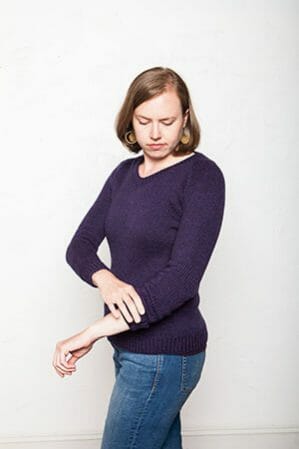 Just like the crew neck Sweater in the first KFE, this pattern is dead simple. The top down construction allows for fitting as you go, and the raglan sleeves makes for uncomplicated increases and provides a generally flattering look, especially with the optional waist shaping.  Add in nearly limitless personalization options and it couldn’t be easier to get the sweater you want.