Making the Most of Luxury Fibers
Finished Crochet Ripple Blanket
by Alison on Mar 5, 2012

This project has been a long time in the making!  I dyed my fiber last year using Greener Shades dyes, then spun it into four different 250g skeins of bulky weight 2-ply, and now I’ve finally transformed it all into a finished object. 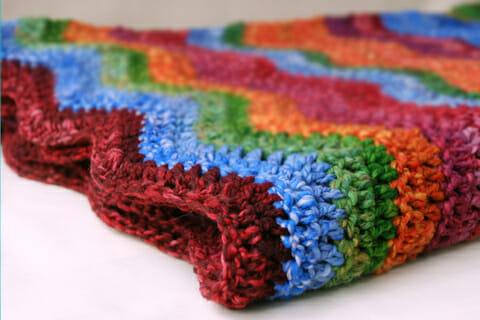 When I’m stash busting or using up unlabeled yarn, I tend to create my own patterns that are a) extremely basic and b) allow me to change plans mid-stream in order to work around yarn shortages.  For this project, I decided to do a basic crochet ripple afghan – I wanted something soothing that let me really enjoy the texture and colors of my handspun without concentrating on a difficult stitch pattern.  I also planned on creating stripes of varying widths so that I had more options for using up the majority of my yarn. 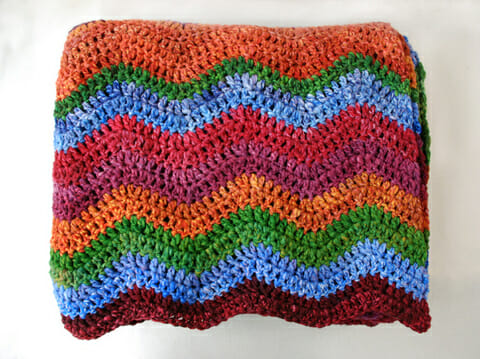 The final blanket ended up being about 6′ wide and 5′ long, big enough to wrap around your shoulders in preparation for some serious couch-sitting-and-popcorn-eating.  It came together quickly, since I used a large G/4mm hook and the yarn was so bulky.  The finished fabric is lofty and light – I was worried about it being too dense, as some of my handspun ends up a little on the compact side.  One of my favorite parts about working on this blanket was the way the color changes in the 2-ply yarn shifted so slowly.  In the picture above, it almost looks like I was working from separate reddish and purplish skeins, but that was just a lucky color transition. 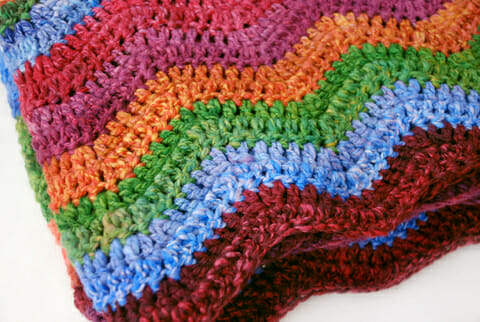 Now that it’s finished, I’m ready to pile it on our couch and fight the cats for it when it’s movie time.  Are any of you working on blanket or afghan projects right now?  Do you have any good patterns for home decor knitting/crochet that have caught your fancy?