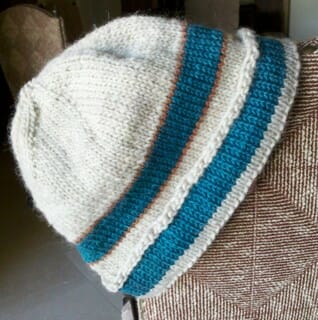 When my sister returned from a trip to England last November, she sent me a ball of natural wool that she picked up as a gift. Did I mention that my sister does not knit? The single ball of yarn was your big hint. Don’t get me wrong, I love my sister and I love that she thought of me. But, a single ball of heavy worsted yarn does provide a bit of a challenge. No wonder it had been sitting in my stash until a couple of weeks ago when the son of a dear friend asked me to knit him a hat. Bingo!

But, still a bit of a challenge because there wasn’t enough yarn for a teenage boy sized hat. I had just finished my Lace Ribbon Scarf…. 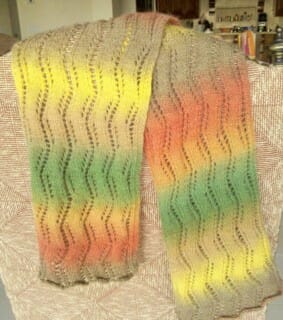 …and the second pair of Reading Mitts. 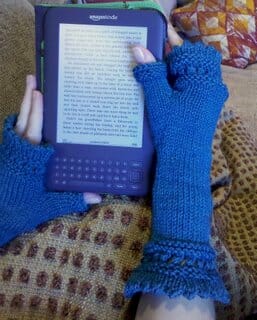 That meant I had a teeny, tiny bit of each yarn left over. If I knit with each yarn double-stranded, they would be close to the thickness of my gift yarn from England.

This was truly an inprovisational hat. I started with seven stitches on a Magic Loop. Increase seven times each round for five rounds to be sure the crown laid flat. I then increased every other round. Thanks to the Magic Loop Method, I was able to keep “trying on” the hat as I worked. When it felt like a comfortable yamuka, I stopped increasing and knit plain for about an inch. Then came the leftover bits of yarn for the orange edged stripe of blue.

I knit a few more round plain with the cream wool and then began the ribbing. My plan was to make the ribbing long enough to fold up over the ears. It soon become clear that I wouldn’t have enough yarn for a generous fold. So, I stopped after the ribbing was about an inch and a half long, knit two plain rounds and then a purl round as a turning edge. I knit two more rounds of cream and then made a second stripe that would fold up over the ribbing. The bit of ribbing would keep the hat snug and the knit stripe would give the hat a nice finished look.

Well, I got about halfway through the second orange edge when I realized I was not going to have enough orange to finish the job. In an uncharactaristic moment of self-control, I ripped back the blue stripe, removed the first edging of orange and then went of to bed. The next morning I knit a plain blue stripe, a round of cream wool and then cast-off.

Bit of a problem. I was so busy being all cute with my design that I completely forgot how strongly stockinette fabric rolls! My knitting angel stuck with me long enough to ensure that I had enough cream yarn to stitch down the cast off edge to the body of the hat.

You may not believe it, but I loved knitting this hat! I enjoyed using up little bits of yarn so successfully! I felt all Little House on the Prairie and the Waltons rolled into one!