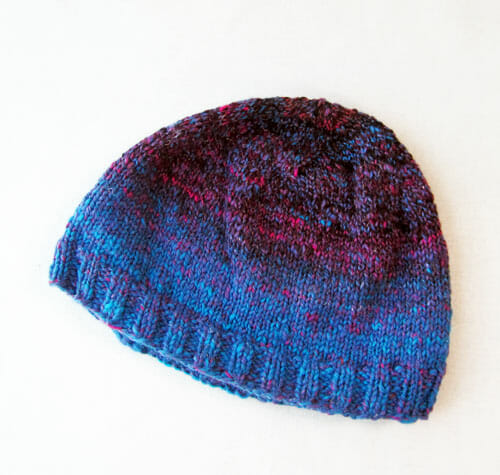 Over the past few weeks Birch Bay evolved from an unspun batt, to spun singles and then to a two-ply yarn. Today, I finally finished knitting it into a delightful slouchy hat (a bit slouchier than I intended, but more on that later). I know that I was imagining a red and black hat last time, but I decided to start at the opposite end of the ball and wound up with an (almost) entirely vivid blue hat instead! I love that the colors shift into the dark magentas towards the crown and the shiny strands of sparkle really pop too. 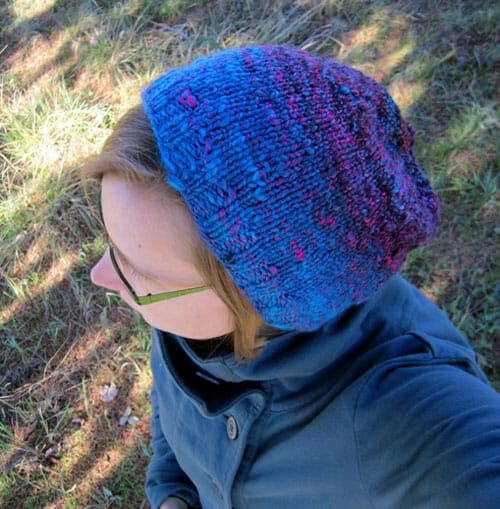 I was so excited to start that I knit a very quick swatch and just dove right in. Everything looked great when I finished up the last few stitches, so I popped it on my head and went across the street for a celebratory hot cocoa. It was so rainy though, that by the time I made it into the bakery my brand new hat had completely relaxed and drooped. Now I’m thinking about trying out some wet felting to get it to snug more to my head. This roving is certainly getting a crafting workout! I think I’ll knit a small cowl with the red yarn I have left over from the other half of the ball. Any pattern suggestions?