For all intents and purposes, I was off the grid last week. I was on the east coast visiting Bob’s family and then I spent four days on the Jersey shore. Bob’s brother and his wife have a lovely home that I begged to borrow for a knitting retreat with a friend. My friend has recently moved from Europe to Puerto Rico. That climate change threatened to put a damper on Jody’s knitting passion for knitting.

I suggested she focus on socks. You can use practically any stitch pattern on a sock that you would use on a sweater. No worry about becoming bored. Jody and her husband also travel a lot – A LOT! What could be more portable, or airport security friendly, than a sock(s)? In the interest of full disclosure, Jody has not exactly had positive experiences knitting socks. She is a relaxed knitter like me but she gets even more relaxed as she knits. So the socks magically grew. I was convinced that if she worked on her socks from the toe-up, she would be more successful.

Jody had several sock knitting books that I had recommended. We decided that the four days were going to whiz by so we needed to pick one book and just stick it out through the instructions. We chose Toe-Up, Two at a Time Socks by Melissa Morgan-Oates. 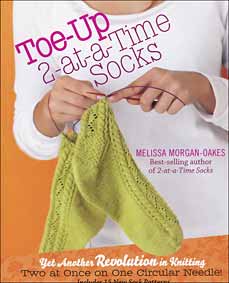 I started our Beach Time being all puffed up as the “instructor”. Melissa, and Jody, quickly put me in my place. The cover text isn’t all bombast. Melissa does have several innovative and “Revolutionary” techniques. The best part, we finally figured out, were the sample socks. Of course, I didn’t let Jody start off with the sample socks because, “I knew what I was doing.”.

Famous last words! By Tuesday evening, Jody was begging me to let her only knit one sock and graduate to two socks later. By Wednesday morning it was clear that we should have skipped the well organized, step-by-step instructions for the two sample socks. Jody started with only one sock Wednesday morning, hit a couple of snags but was flying along by Thursday. I have to say I was more than just a bit jealous as I watched Jody knit Melissa’s very cool short-row heel. Nope, I’m not going to tell you how! Just know that I am going to raid the office stash today so I can knit two sample socks at the same time.

Throughout the entire sock knitting vacation, we had lots of canine company. Xena loved the way Jody knit with her legs straight out on the sofa. 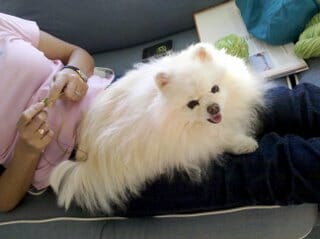 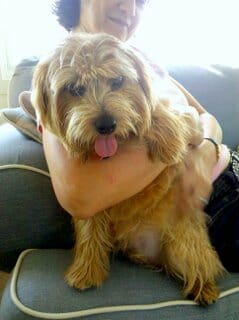