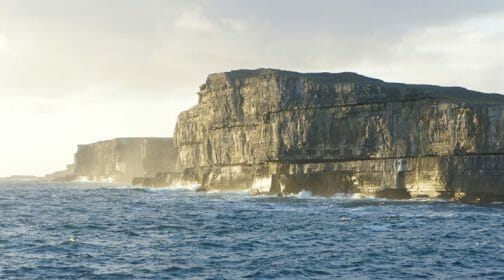 Knitters in the know are often more than familiar with the classic Aran jumper; big chunky Irish ganseys (or guernseys), traditionally hand-knitted from unbleached wool. Originally worn by working fishermen, they also became popular fashion garments in the US during the “golden” era of Hollywood. Grace Kelly. Steve McQueen. Paul Newman. Marilyn Monroe. Icons in their own right, the stars of the silver screen adopted this classic garment as part of their everyday attire. As such, it’s no wonder the treasured Aran knit sweater continues to be reinvented to this day in the fashion industry.

Love a good urban legend? There happens to be one based on the stitches of these namesake sweaters. The story goes that each jumper knit for fishermen in the Aran Islands had a different combination of patterns: one unique to each family. In the tragic (yet often frequent) event of a fisherman dying while at sea, the body could be identified when washed up by the specific stitches in the jumper. No matter how long the body had been lost at sea, the pattern of their Aran jumper would have endured. A bleak notion? Yes! Fascinating? VERY.

With the idea of these stitches serving as a means of relaying a family’s legacy, the breakdown of each individual stitch’s nomenclature becomes all the more intriguing.

Diamond – The Diamond stitch represents and reflects the small fields on the islands (which were labored upon by the many farmers that resided there). This stitch is used in hopes of good luck, success, and wealth in the fields of the Aran Islands. It is also thought to represent the shape of the fishing mesh, as well as wealth and prosperity.

Cable and Rope – The cable stitch, which is the most frequently used of the Aran stitches, was originally used to represent a fisherman’s ropes, and are a symbol of hope and safety for fisherman, thought to better qualify them to have a fruitful day out at sea.

Honeycomb – A tribute to the hard work of the bees, the Honeycomb is said to be a lucky stitch, signifying prosperity, or in the case of fishermen, a good catch.

Moss – Seen as a symbol of growth, the Moss stitch is thought to represent the Carrageen moss that grows on the Aran Island. Said to symbolize abundance and growth, this stitch is often used in tandem with the diamond stitch.

Blackberry – Similar in appearance to the wild berries that grow abundantly in the thickets of Aran Island, the blackberry stitch serves as a reminder of the rich bounty that can be found in nature.

Zig Zag – Sometimes known as Marriage Lines, the zig zag stitch represents the ups and downs of marriage as well as the twisting cliff paths that are on the islands.

Basket (aka lattice stitch) – Thought to represent the fisherman’s basket – an omen of a good catch.

Whether any of these origin stories are based on actual historical meaning or are simply folklore, there is no denying the intricate beauty and timeless appeal of the classic Aran sweater.