I took the ferry to Victoria, British Columbia yesterday for an extended Labor Day weekend.  I had a great time, walked all over town, and had tea at the Empress Hotel.

But what was particularly cool were the shops that sold authentic Cowichan handknit sweaters, bulky yarn if you want to knit your own version, and unspun roving.  My friend snapped a picture of me holding a single skein of this bulky yarn. 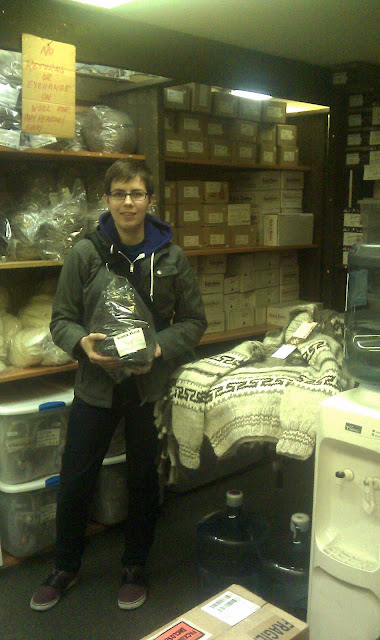 Cowichan sweaters are the only sweater design to originate in North America, according to Pricilla Gibson Roberts’ Knitting in the Old Way.  Pricilla has also written a book specifically about Cowichan/Salish sweaters called “Salish Indian Sweaters”.

You may have seen examples of Cowichan inspired sweaters at the 2010 Winter Olympics in Vancouver.  Or on “The Dude” in the Big Lebowski.  Anyway, Cowichan sweaters have a fascinating history, and it was amazing to see traditional handknit sweaters still being created today.

ETA Yes, I do see the irony in using a vacation day to look at yarn.