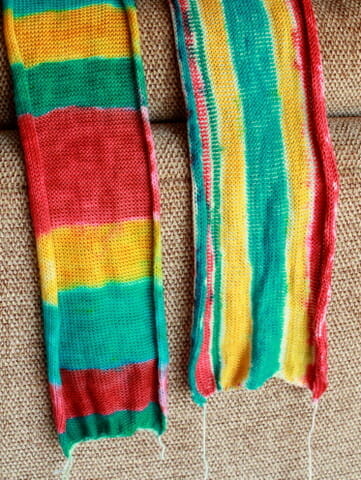 At this point I have two lovely sock blanks. I am going to be knitting with two strands held together for each of my Shape It Scarves from The Knit Stitch by Sally Melville.

The easy, and logical, thing to do would be to just start knitting right off the sock blank. You guessed it! I did the absolute opposite of easy and logical!

What I wanted to do was flip one strand completely over and then knit with the two strands held together. Basically knitting from opposite ends. As you know, knit fabric only unravels nicely from one direction. Now, follow my steps closely.

First, I unraveled the sock blank holding the two strands together. I made a loosely wound, center pull ball. I did this by hand because it seemed easier than trying to work a ball winder.

Then I made two sloppy balls working from the big ball of yarn. I didn’t bother with making center pull or even that nice looking. The goal was to get the two strands separated. I had to wind a bit on one ball and then wind a bit on the other. A bit slow but we were watching The Blind Side while I did this step so it wasn’t too tedious.

I re-wound one ball into a nice, loose, center pull ball. Yes, you could use a ball winder but by now you probably have the whole “hand-winding” process down to a science. I wound the second ball into a nice ball, not bothering with the center pull strand. 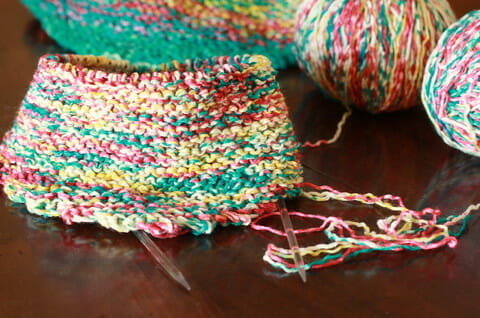 In theory, I could have knit from the two balls I wound from the sock blank. But I found that it was hard to unravel, and wind two nice yarn balls at the same time.

I can’t really say if all this ball winding was worth it but I am very happy with my scarves.