More fun with Food Dyes!
Diving into Dyeing
by Knit Picks Staff on May 10, 2010

I’ve been wanting to try my hand at dyeing for a while now. The thought of the mess, the equipment and doing a really bad job at it kept me from trying. But, after I found out there was going to be a dyealong, I thought, hey! Perfect opportunity! Now I can at least commiserate with others who have also made a giant mess. So, I got some sock blanks, let myself get inspired, and dove right in.

I decided to try acid dyes, since it’s relatively low-odor and I could do it indoors (with proper ventilation, of course). That proved to be an advantageous decision, because when I got ready to dye it was raining! I got all my supplies together and started the process. 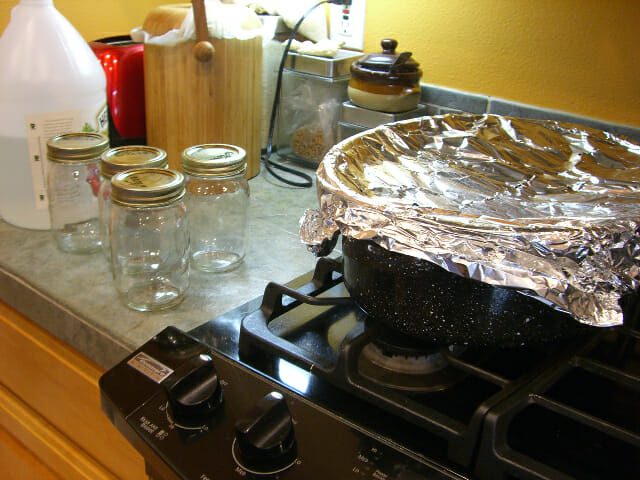 (that grannyware turkey roaster – my new dyepot – is so disgusting. I got it at a thrift store for $3. It looked like it was used for some crazy science experiment. I would never, ever use it for food, which is what made it a perfect pot for dyeing!)

I soaked my sock blanks for a good three hours before starting to dye, just to be sure they were totally soaked through. I watched our sock blank dyeing tutorial video about ten times until I had it just about memorized. The only thing that wasn’t mentioned is what to do with the leftover dye stock. It’s nasty stuff, and I certainly don’t want to send a bunch of it down the drain. So, I decided to soak some ‘questionable purchase’ yarns and just experiment with dyeing those as well. 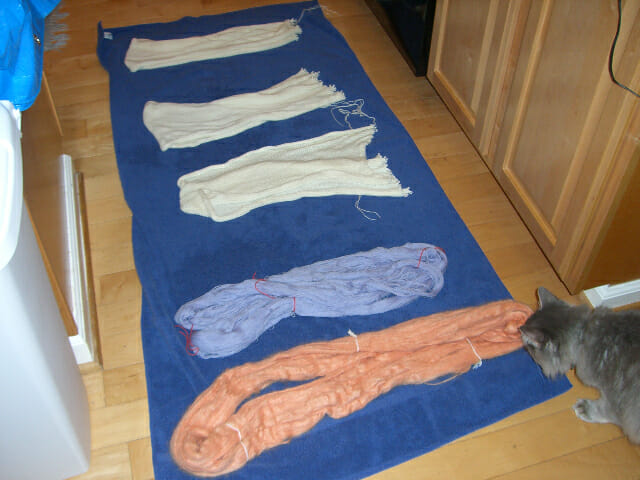 The next step was to get the dyes mixed. I’ll admit that this is where I went all middle school art teacher on it and I didn’t bother measuring anything really. This is ART! measuring is like MATH! I was channeling my inner Matisse, and there was just no room to do it ‘right’. I mixed colors willy-nilly, experimented with watering down the stock, splattering it, pouring it, and generally making a soggy mess of my kitchen.

So, how did it all turn out? You’re just going to have to stay tuned to see! 😉 (and though I was tempted by a certain fluffy white belly, no kitties were dyed in the process.)