Food-Colored Sock Blank!
Surprise ingredient in my dyeing recipe?
by Kelley on May 7, 2010

Admit it! I completely surprised you! 🙂 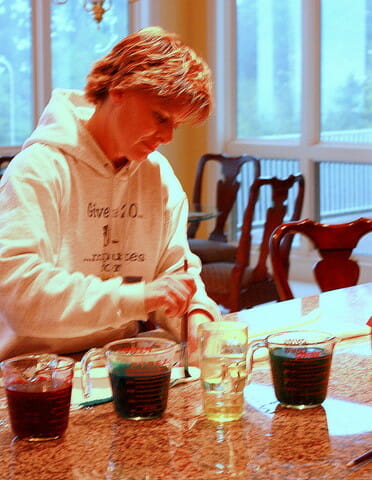 Here’s the thing – I wanted to come up with a way to be able to paint a sock blank with less bleeding between the colors. I was imagining a way to keep the dye particles suspended, or glued, in place. I asked Nina what she thought of the idea. Her only concern was how the cornstarch would react to the vinegar used to set the Jacquard dyes. In her ever efficient way, she went to the Internet, did a bit of research and told me she thought cornstarch would be just fine.

The challenge was figuring out a Method. I made a lucky guess and ended up with a solution of 3 Tablespoons of cornstarch mixed into 2 cups of hot water. After that, all I had to do was keep adding dye powder and stir. I used a paintbrush to take up some of the dye solution and test out the color on a piece of paper. Sometimes the color came out the way I wanted just using one Jacquard color powder. A couple of times I had to add a bit of another color powder to achieve the color I wanted. Yes, my basic understanding of a color wheel came in handy. Once I had my dye solution color perfected, I added 1/4 cup of white vinegar to the 2 cups of dye solution.

The next step was to set up the little “sauna” for my sock blank. I used an old soup pot with a vegetable steamer in the bottom. I added water just up to the bottom of the steamer.

My sock blanks were still soaking in the laundry room sink. I let the water drain out of the sink, laid the sock blanks onto a towel, wrapped them up in the towel like a sausage, put them in my washing machine and gave the whole thing a spin to get rid of the excess water.

I had laid on a very long bit of plastic wrap on my kitchen counter. I made sure that it would be a few inches longer than one sock blank on each end. I laid one sock blank on the plastic wrap. Notice how it is nice and flat. That is why you had to be sure your cotton security strings were long.

I had my cups of dye mixture set up right by the sock blank. Also, a large glass of water. Think watercolors. I needed to rinse out me brushes before going to a new color. I used a 1-inch flat brush. 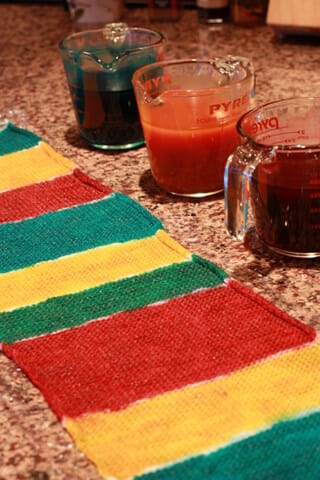 As I painted the first sock blank, I noticed that the colors stayed in place more as I worked my way down the blank. Obviously, the sock blank was drying out as I painted my stripes. Since it was getting to be pretty late at night, I made a creative decision.

I would finish the first first sock blank but let the second one dry completely and paint it the next night! Just to see what would happen!

When I finally finished painting my sock, I rolled the whole thing up lengthwise like a long, fat snake. I coiled it up and placed it on the steamer in my “sauna” pot. I put on the lid and brought the water up to a gentle boil. I let my coil steam for about half an hour. That meant that I had to add water to keep the pot from boiling dry. 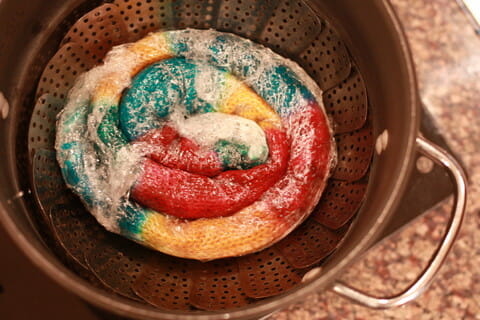 After half an hour, I took the pot of the burner, removed the lid and let the whole thing cool down. I took my colorful coil over to the sink, unwrapped it carefully and rinsed it out. Absolutely no color leached out! Yippee!! 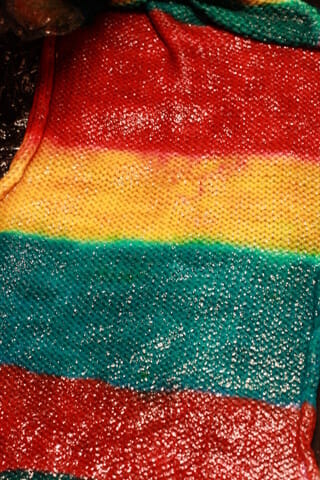 This is a point at which I need to give you a heads up on the cornstarch.

I just rinsed the sock blank like usual and set it out to dry. When it was dry, it felt like linen yarn before you start knitting with it. A bit stiff. I chose to ignore it but I’m not sure that was the best plan of action. I ended up making skeins later and rinsing them again.

Here is what I would recommend. You still have the cotton strings holding everything in place. So, run the sock blank through a wash cycle without any detergent. I ended up washing my first scarf like that and it came out all nice and soft! Better to do the starch removal early in the process. Your yarn may still be a bit stiff but it will soften up as you knit with it.

Tomorrow I will show you how I unraveled my sock blanks into lovely yarn balls ready to knit my Shape It Scarf.

P.S. Sorry about skipping yesterday. I am sure you will understand. I was in a knitting mood! So, I knit on my Spring Fling Convertible Scarf all afternoon.