Podcast Episode 232: Inside the Making of Knit Picks Pattern Collections
Next Post >

6 Ways to Wear the Under 100 Knit Collection
Crafting for the football fan
by Stacey on Jan 17, 2014

We’re coming to the end of the NFL season, and while I am definitely more of a baseball fan, I do enjoy a lazy Sunday watching some football.  And, as of this moment, my two favorite teams are still battling to make it to the SuperBowl (that would be the Seahawks & the Patriots, mainly due to my Seattle & Boston connections). If you’re reading this after January 19th, and neither team is in the SuperBowl, just picture me being very sad. (ETA 1/20 – Yay!  Go Seahawks!)

Since I have a lot of friends who are also sport fans, I’ve gotten requests for some knitted/crochet items in team colors so I thought I’d share some of my favorites patterns 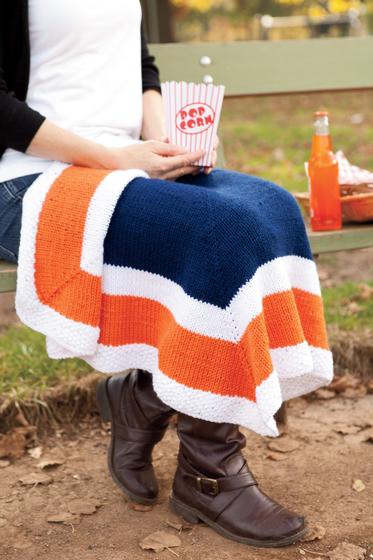 First off, Allyson Dykhuizen‘s Stadium Blanket, while designed for baseball fans,  is the perfect project for football fans too – those stadiums can be cold!  It’s easy to customize for your favorite team too.  Since our new Brava colors filled some much needed holes for team colors (Silver!), I put together a little chart of what colors in Brava Worsted I would suggest for your favorite NFL teams. (Click on the image to see a larger version)

Not all colors are perfect, but I tried to get as close as possible to the official team colors.  For the Stadium Blanket, you only need two skeins of Brava for each color, so this makes a great, economical project

If you want something a bit quicker, hats are always a good choice – did I mention that it can get cold during those games?  When watching the football players on the sidelines, I notice that many of them wear stocking caps with big pom poms on top – in team colors, of course.  A good customizable version of those would be Rilana Riley-Munson‘s Oregon Slopes Hat. 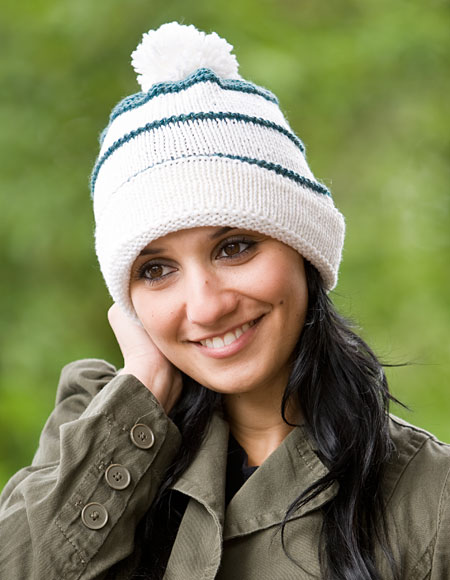 Just pick 2 of your team’s colors and cast on – you’ll be done in no time.

If your football fan doesn’t have a particular favorite team, check out some of these cute projects that would work instead.

From Nona Davenport, there is the cute Football Hat, with sizes ranging from infant to adult. 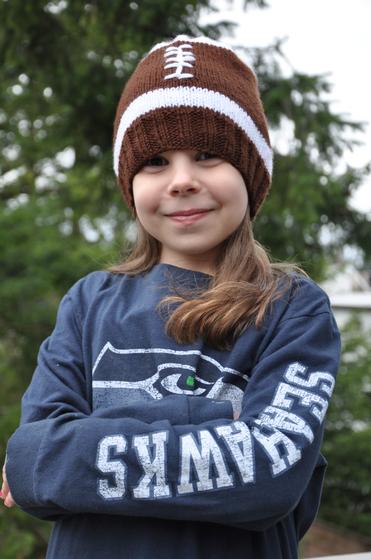 While this one is in Brava Worsted, Nona also has a Faster Football Hat in Brava Bulky.  If your fan is a bit younger, she also has a cute Football Legwarmers pattern to keep those baby legs warm during games.

And an even quicker project is Emily Kintigh‘s Stuffed Football.  A perfect choice to throw at the TV when your team misses an easy touchdown. Er, not that I have done that. 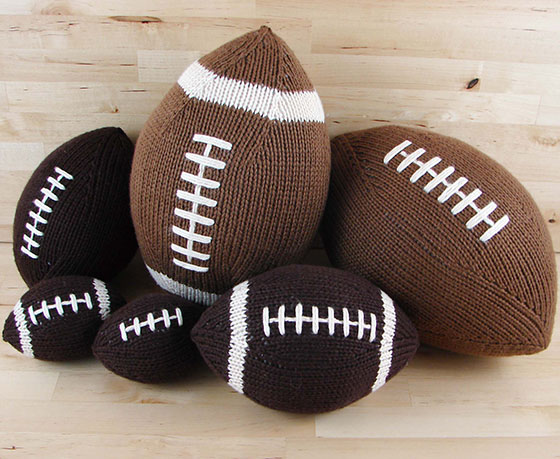 Well, hopefully your team is on the winning side this year – even if they are not, I hope these will get you crafting in time for next season!